The Document Object Model (DOM) is a programming interface for HTML and XML documents. It represents the structure of a document as a tree-like hierarchy of objects, with each object representing a part of the document (such as an element, attribute, or text node). JavaScript can be used to manipulate the DOM, allowing developers to create dynamic web pages that can update in real-time based on user input or other events.

There are two types of Document Object Model (DOM):

Both Core DOM and HTML DOM are language-independent, meaning that they can be used in any programming language. However, the HTML DOM is specifically designed to work with HTML documents, while the Core DOM can be used with any kind of structured document, including XML and HTML.

Why developers use (DOM) manipulation?

Developers use DOM manipulation because it allows them to create dynamic, interactive web pages that can update in real-time based on user input or other events. This can greatly enhance the user experience by making pages more responsive and interactive.

By manipulating the DOM, developers can create interactive forms, create animations, change the layout of the page, and much more. It also allows to create Single page application which can give a better user experience as the page does not refresh.

Additionally, DOM manipulation allows developers to easily update the page based on data received from a server or other external source, making it an important tool for building dynamic, data-driven web applications.

Where you can use (DOM)?

The Document Object Model (DOM) is a programming interface for HTML and XML documents, and it can be used in any programming language that can interact with the web page.

JavaScript is the most commonly used language for DOM manipulation, as it is the only programming language that can run natively in web browsers and can directly access and manipulate the DOM. But it’s not only limited to JavaScript, you can also use DOM manipulation with other languages such as:

These libraries are used to interact with the DOM, so you can use any language you are comfortable with to manipulate the DOM.

An example of how DOM manipulation happens in JavaScript:

This is just a simple example but it demonstrates how easy it is to manipulate the DOM in JavaScript. 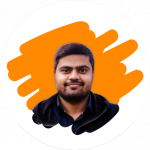 A penchant for experimenting with the latest technologies and a knack for turning complex problems into elegant solutions.